Special versions of many kits were made for the mail order firm Quelle. Apart from a few details, they are indentical to contemporary Philips (and later Schuco) kits.

The diagram shows the kits in the series; basic kits on grey background, expansions on white. The combination of both kits is eqivalent to EE 1003, and can accordingly be further expanded with EE 1004, EE 1005, EE 1007, or EE 9050.

I do not know of any difference between these Quelle variants and their normal counterparts.

In later versions of the kits, two further digits were appended to the identifying numbers, expanding them from five to seven digits, and new kits added later were also given seven digit codes. There is considerable variation in how the digits of these longish codes are grouped for legibility – 6+1 and 3+4 separated with spaces and 3+3+1 separated with periods all occur. For consistency I will apply the latter method even where not originally used. Labor 1 became 111.420.6, Labor 2 became 112.330.6, Labor 3 became 112.530.1 and Labor 4 became 112.620.0.

An oddity is a rare variant of Labor 3 without the Quelle logo, but the same non-standard contents. It is identified simply by the number 003 and has the graphical design of EE 2003 despite being more similar to the smaller EE 2050

There are both Philips/Quelle and Schuco/Quelle versions of the four basic kits A–D. Both were originally just marked by stickers on the box lid, but the latter eventually got different numbers and titles: 6121 A · Start Lab, 6122 B · Studio Lab, 6123 C · Master Lab and 6124 D · Super Lab. The two smaller kits have minor additions (an LDR in the A kit), with a few new constructions described in a leaflet. 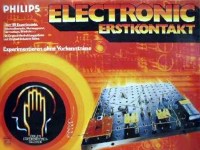 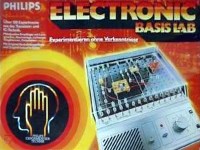 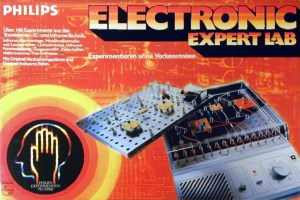 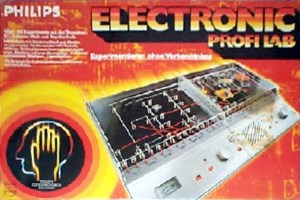 The Quelle chemistry kit 26280, later 262800 6 probably corresponds closely to CE 1402. The main picture on the box is a mirror image of the one on CE 1402, while the picture on the manual is surprisingly taken from the CE 1401 manual instead. Perhaps the contents cover parts of both kits, just as the Quelle physics kit 26279 cover both PE 1501 and parts of PE 1502? In any case, that these two Quelle kits were given consecutive numbers indicate that they were contemporary, giving 1971 as the probable year of introduction for 26280.

There was made a Quelle variant of the 6601 A · Basis Lab kit from the ABC or 6600 series. Initially it used the same name, number, box and manual as the normal kit, only distinguished by a sticker on the box cover with a larger number of experiments (300 instead of 275) and a four-page leaflet included in addition to the manual. Later the kit was renamed to 6631 A · Studio Lab, but although this meant changing the box cover, both the text mentioning 275 experiments and the sticker with the number 300 were kept. The leaflet accompanying the manual was even later updated to no longer refer to the name Basis Lab.

The Quelle physics kit 23171 is a subset of PE 1550. The box has the same main picture (only in black and white) though not all depicted parts are included. I have never seen the manual to 23171.